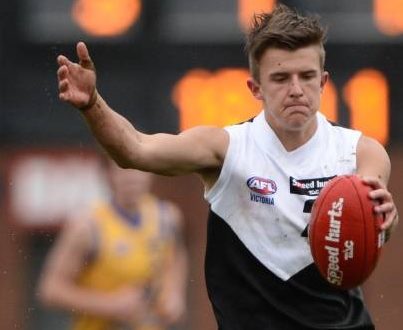 Article by David Brehaut, The Courier

Mellington is not extending his VFL career and will play solely with Ballarat, while Schnerring has chosen Ballarat as his home club after joining Williamstown in the VFL.

Originally from Horsham Saints in the Wimmera league, Mellington had three years with the Roosters – although he missed his first in 2015 with a knee injury – after two seasons with the North Ballarat Rebels.

He had East Point as his home club in 2016 when he made seven appearances with the Roosters.

He played the same number of VFL matches this year while aligned to Horsham Saints.

Schnerring from Warrnambool has also followed the Rebels and Roosters pathway, stepping up to the VFL in 2016 when he had Redan as his home club.

His did not play at all this year after tearing ankle ligaments pre-season.

From North Warrnambool, Bowman has been at Bungaree for the past three years and also spent time in the Rebels program.

Likely to play as a tall forward, Prockter was in Ballarat’s 2010 and 2014 grand final line-ups before going to Donald in the North Central league.

Hughes led the Swans’ goalkicking in 2016, but work commitments meant he was unable to play this year, while Mead has not played for two years owing to injury issues.

Ballarat football manager Mark Verberne said the Swans’ were delighted with the way their recruiting had fallen into place.

He said the focus had been on adding experience to a largely young developing list.

Verberne said the club was encouraged to have 16 youngsters moving up from the under-18.5s and would be putting a special an emphasis on developing its young players for the long-term.

The Swans are looking to appoint a development coach to work specifically in this area.

Verberne said with an expected influx of players from the Roosters’ program and the VFL no longer having the AFL Vic development league as a feeder competition, the BFL was likely to be stronger next season – making the need for more depth imperative.

He said the increased depth would also create a much more competitive nature within the player group as the club looked to climb the ladder.

Visit The Courier for full article