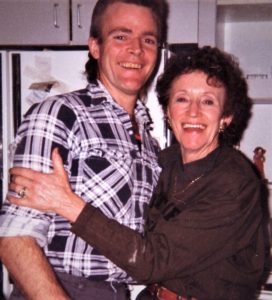 The Ballarat Football Netball Club is saddened and wishes to express it’s deepest sympathies to the extended Pryor family on the passing of Marie Pryor (nee Wilson) on Friday May 22, aged 91 years.

Marie was the wife of past President Dr. Jim Pryor (President 1994 – 2001) who passed away whilst still club President in 2001. Together, Marie and Jim raised five daughters and five sons. Hats off to that Marie!

Commonly referred to as the matriarch of the club, Marie was an ardent supporter, both during Jim’s time as club president right through until her passing.

Marie regularly attended games and club functions. The annual ‘Jim Pryor Wine Auction’, an event running for 35 years has been attended by Marie every year without fail only until recently due to health. The Pryor family continue to be generous supporters of this event.

A true Lady, Marie was a much loved figure around BFNC always keen for a chat with anyone, and to learn how the club was progressing on and off the field.

PRYOR (nee Wilson) Marie. Marie Darlington Pryor, daughter of Ken and Linda Wilson (dec), sister of Jeanette (dec), wife of James Henry Pryor (dec), survived by, and beloved mother of Sally, Mark, Jill, David, Richard, Mary, Susan, Matthew, John, Annie, beloved mother-in-law, grandmother, great-grandmother and friend to many, died peacefully at Mercy Place Ballarat on Friday May 22. A private family service will be held and a celebration of Marie’s life will be planned at a later time. It is requested that any commemoration and condolences be expressed through a donation to Ballarat Hospice Care in Marie’s name.