AFL Life Member and 300 game star, Drew Petrie, is set to return to where it all began next Saturday June 9, when he pulls the red & white jumper back on for Ballarat against Redan at Active Electrical Oval, Alfredton.

Petrie, who played all of his junior grade football with the Ballarat Football Club, retired from AFL football at the conclusion of the 2017 season having played 332 AFL games. After representing the Ballarat Rebels in the Under 18 TAC Cup, Drew was selected with pick No. 23 in the 2000 AFL draft and went on to become one of North Melbourne Football Clubs most decorated players. All-Australian in 2011, NMFC leading goalkicker 5 times (2009, 2011, 2012, 2014, 2015), and club vice-captain, Drew finished his time at North Melbourne sitting second on the all-time games played (316 games), and 6th on their all-time goalkicking (428 goals). Drew went on to represent the West Coast Eagles last season, playing a further 16 games and kicking 16 goals. 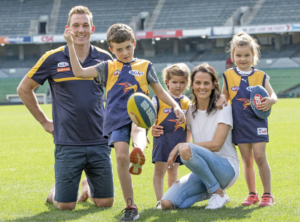 Drew and his family, wife Nicole, son Jack (7), and daughters Abby (6) & Ruby (4) have made Perth their home, with Drew now a game development coach with the West Coast Eagles which sees him working alongside the best Female, Multicultural and Indigenous talent in Western Australia. He also works part-time as a high performance coach for the AFL, assisting the elite forwards and ruckmen around Australia. Nicole and the children are all making the trip from Perth to watch their famous dad play again.

My enjoyment of our great game started because of my time at the Ballarat Football Club. I still have fond memories of doing the senior scoreboard in the driving Ballarat rain, after playing junior footy in the morning. My family will all be in attendance and I’m really looking forward to pulling on the red & white jumper again.

True to his support of his grassroots club, Drew purchased an ‘1860 club membership‘ at the beginning of the year and the Ballarat FNC presented Drew with the number 1 ticket for season 2018.

The Petrie family have always been closely connected with Ballarat FNC. His older brother Scott, who played his junior & senior football with Ballarat, now coaches one of the clubs under 10 football teams. Niece Maddi currently plays Under 11 netball, and nephew Lachlan plays under 10 football. Drews mum & dad, Sue & Trevor, have also always kept close contact with the club and will be at the game Saturday along with younger sister Lauren and brother-in-law Joel.