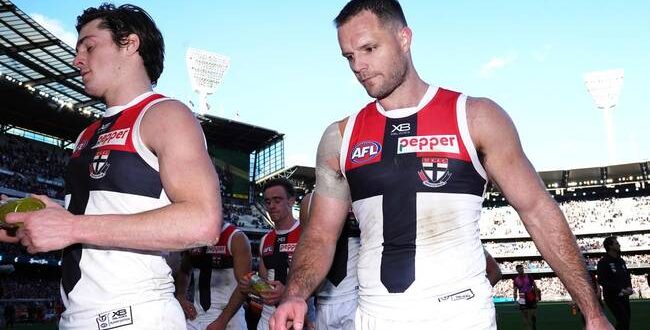 With St Kilda currently based in Noosa, Brown slipped out of town quietly, as part of a low-key exit strategy designed to avoid the emotional goodbyes with team mates. He penned an emotional farewell letter to his St. Kilda teammates.The letter, which was shared via the club’s website, was read out to the players.

In the letter to his team mates Brown wrote,

It’s the right time for me now to give what I have given football for the past 14 years to my other team – my girls. They need their Daddy and Husband more than ever and there’s nothing that can be bigger than that. I thank you for understanding.

The full letter can be viewed here: https://www.saints.com.au/news/784693/nathan-brown-s-heartfelt-goodbye-to-brothers-

The Ballarat Football Netball Club members and supporters congratulate Nathan on a wonderful career. We wish Nathan and his family all the very best in the next stage of his life. Bravo.

Video of Nathan Brown and Drew Petrie returning to Alfredton Oval to reminisce on their junior football days with ex coach Lindsay Vanstan.