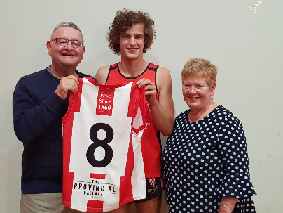 Last Night Helen and Rob James were very proud to announce and present the # 8 Jumper for 2018 season to another inspiring young man in Luke Wynd.

In a tradition that has been in place since the sad passing of their son Matt James in April 2011.

Matt played all his football with the Ballarat Swans from U-12’s thru to Seniors and foremost, Matt always displayed Loyalty to our great club,and played with passion and courage for the team.

Copping with the down times on the field which occurred, but celebrating the wins and the fun times off field in memorable fashion. He was always one of the first to put his hand up with anything needed to be done around the club – being involved with fundraising and social events.

When Matt fell ill and eventually diagnosed with Pancreatic Cancer, his fighting qualities & courage to get over this terminal illness were on full display and he provided immense inspiration to every-one around the club at that time.

In his last days, the Board determined the #8 Jumper that Matt had worn thru 120 Under Age Games and 105 Senior games will be presented each year to a player moving officially from the U-18’s onto the Senior List.

It would be given to the player having played all their Junior footy with the Swans and showing all the loyalty and team characteristics Matt had.  President Shane Manley visited Matt at the time and conveyed the proposal too him, He was stoked and very pleased to endorse Ross Thompson as the first recipient for 2011 Season.

Luke Wynd fitted all these qualities extremely well – including his commitment this year to come back each week for training and matches – as a result of his studies in Melbourne. Luke responded to the announcement that he was very honored to be selected for this and he will do his best to honour the #8. 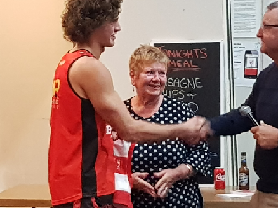 Rob presents Luke with the Thunder 8 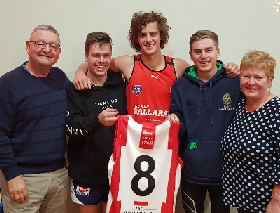 Helen, Rob and Luke with previous Thunder 8"s Alex Stepnell and Will Garner

Luke joins a growing list of fine young men who have embraced the commemoration of Matt (Thunder ) James :