We are very happy to announce the signing of three new players to the club for season 2019.

Nich Weightman was a Werribee listed VFL player in 2018 and also won the Albion best and fairest in the WRFL. Previous to that the Bungaree junior player played 25 VFL games for the roosters and was part of GWV Rebels in 2013 and 2014. 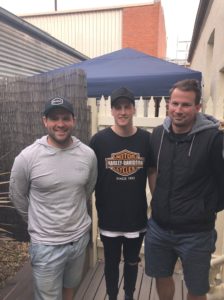 Tom and Ben come to us from SMW Rovers, where both had outstanding seasons finishing first and second in the club’s Best and Fairest. Both are in their early 20’s and are very eager to test themselves at the higher level. Ben was a previous under 18 player with us and played his junior footy at Springbank. Welcome boys and we look forward to seeing you in the red and white in 2019.

Former AFL & VFL player, Andrew Hooper has committed to the club as playing assistant Coach for season 2019. Also signing to the club this week is Ash Munari and Stephen Patterson from Carisbrook FNC.

I could see the enormous potential with this playing group. I’m hoping to add some experience and on ground leadership to our young list and am looking forward to working closely with Joe (Carmody). 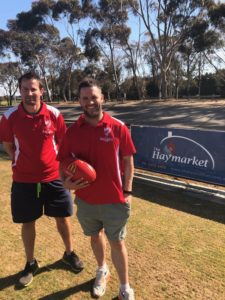 Hoopers’ playing career is a decorated one. Having played his entire junior career with Golden Point JFNC, hooper then played two seasons with the GWV Rebels in 2008-09. He was selected to play for the Victorian Country side at the AFL Under-18 Championships and was the joint-winner of the Larke Medal, with David Swallow awarded to the best and fairest player at the championships. At the AFL Draft camp, Hooper came second in the agility test, third in the 20 m sprint and equal third in the standing vertical jump, before being picked up by Western Bulldogs affiliate Williamstown in the VFL.

He was promoted to the primary list in round 15 of 2010 season, and made his senior debut with the Western Bulldogs in the 1st semi final against Sydney Swans kicking a crucial goal sparking a bulldogs comeback putting them into a preliminary final. Hooper was drafted to the Bulldogs senior list at the conclusion of 2010 and played a further two seasons before being delisted at the end of 2012. He then played with Glenelg FC (2013-14) in the SANFL, North Ballarat Roosters (2015-16) VFL, and Werribee FC (2017).

Hooper, 27, has existing family connections with the club with his brother Daniel involved at junior level. Daniels son Emerton (Andrews nephew) plays with Ballarat’s under 10 squad.

Ash Munari this season kicked 105 goals for Carisbrook including one haul of 18! He will add some serious potency to our forward structure.

Stephen Patterson also comes with a raft of experience and was awarded best on ground for Carisbrook in their grand final victory in the Maryborough-Castlemaine District FNL.

The club hopes to announce further key signings in the coming week.