Celebrating the 160th year of the BFNC, the club has gone back through some of it’s old artefacts in safe keep by the club’s historian, and realised how significant one item in particular is to the history of the game.

Adding to the significance of the rule book is a hand written note on the reverse from Angus Greenfield, Club Captain from the 1899 season, and the son of the clubs first President and Captain Alexander M. Greenfield. The note reads: “I showed these rules at the Ballarat Football Clubs meeting on it’s 70th Ano (1930, 70 year anniversary). I hope will show them on the 100th. I won’t. – Angus Greenfield. 03-01-34.”

This note indicates the rules are in fact Alexander Greenfield’s copy, handed to his son Angus who in turn passed onto the club in 1934. They have been held safe since, and passed on through the decades via the club historians of each time. John Smith, historian since 2002 said that many extremely old and historically significant pieces have survived close to 150 years.

In addition to the 1862 rules, we also have the ‘minutes’ book of club secretary James Walker from the 1881 season, and membership cards from the 1882 and 1887 seasons. They are all still in good condition, and give good insights into the club at that time.
– John Smith, Club Historian. 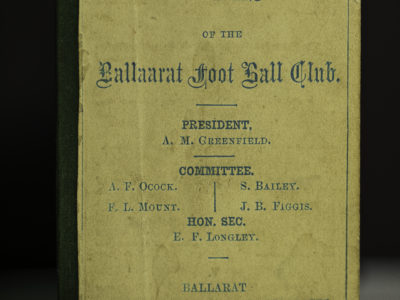 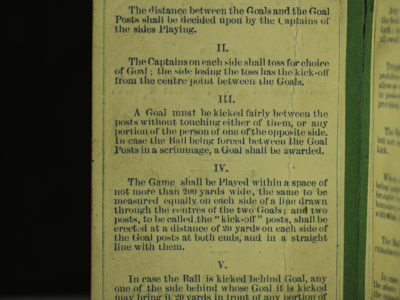 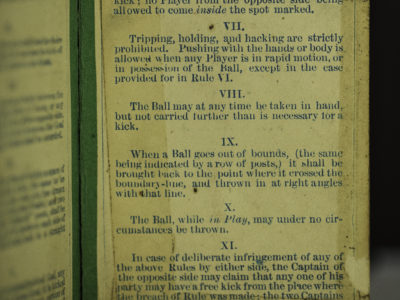 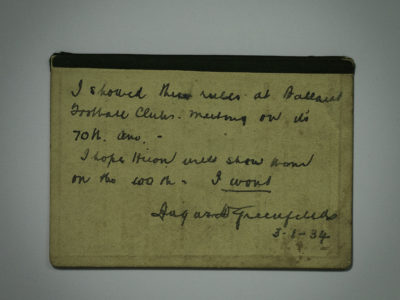 Note from Angus Greenfied on reverse side. 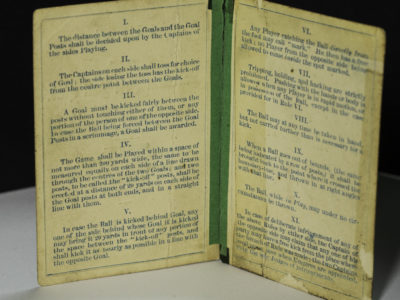 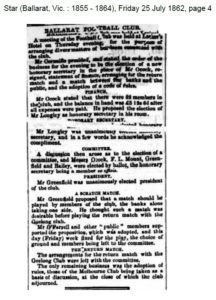 An article from the Ballarat Star newspaper from 25 July, 1862 indicates the date that the rules were adopted were at a meeting of the Ballarat Football Club committee on Thursday 24 July, 1862. They were done in preparation for two matches. One between the ‘banks and the public’ and also a return match between the Geelong FC and Ballarat FC. The Rules of the Melbourne Club were taken as basis for the discussion.

The article reads as below:
BALLARAT FOOTBALL CLUB
A meeting of the Football Club was held at Lester’s Hotel on Thursday evening, for the purpose of arranging diverse matters of business connected with the club. Mr Corneille presided and stated the order of business for the evening to be the election of a new honorary secretary in the place of Mr O’Cock, resigned, statement of finance, arranging for the return match and a match between the banks and the public, and the adoption of a code of rules.

FINANCE
Mr O’Cock stated that there were 82 members in the club, and the balance in hand was 3p 12c 6d after all expenses were paid. He proposed the election of Mr Longley as honorary secretary.

HONORARY SECRETARY
Mr Longley was unanimously voted secretary, and in a few words he acknowledged the compliment.

COMMITTEE
A discussion then arose as to the election of a committee, and members O’Cock, F.L. Mount, Greenfield and Bailey, were elected by ballot, the honorary secretary being a member in office.

PRESIDENT
Mr Greenfield was unanimously elected president of the club.

A SCRATCH MATCH
Mr Greenfield proposed that a match should be played by members of the club, the banks alone taking one side. He though such a match was desirable before playing the return match with the Geelong club. Mr O’Farrel and other ‘public’ members supported the proposition, which was adopted, and this day (Friday) week fixed for the play, the choice of ground and members being left to the committee.

THE RETURN MATCH
The arrangements for the return match with the Geelong Club were left with the committee. The only remaining business was the adoption of rules, those of the Melbourne Club being taken as a basis of discussion, at the close of which the club adjourned.
ARTICLE ENDS 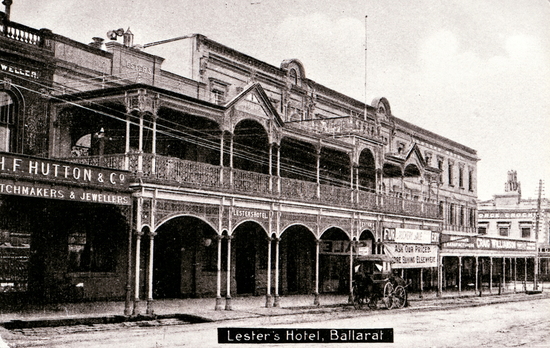 Location of the meeting where committee adopted the ‘1862 Rules of the Ballaarat Foot Ball Club’. Lester’s Hotel in Sturt Street.

Further to the historic finds, the club also tracked down vision from a game between Ballarat FC & Geelong FC at the city oval, Ballarat on 17 April 1911. One of the first films of Australian Football ever recorded.